Made from a Suzuki 80 step through (free) and a couple of 10” scooter wheels (20 euro). The idea is to test if any of the supposed benefits can be achieved, and what problems there might be in applying these. Middleton Link is a solution to a bump steer problem in this concept.

All were demonstrated as being achievable, but measurement is difficult.

I invented the Middleton Link to eliminate the severe bump steer inherent in a system where the handlebar axis and the steered axis varied with respect to each other by a significant amount, and the 2 axes are not aligned with suspension pivots. Alternatives like cable(s), hydraulic and complex linkages were considered, but all have more problems than this system.

The Middleton Link has been used subsequently by several motorbike builders to implement unconventional steering systems.

I see that Honda have implemented this concept on their 2018 Gold Wing touring motorbike with Hossack style front end. This is exactly the application of the Middleton Link I have seen implemented by some other privateer builders. 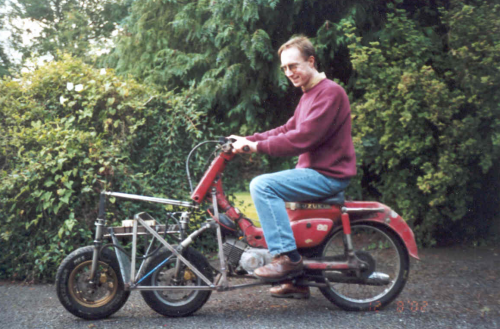